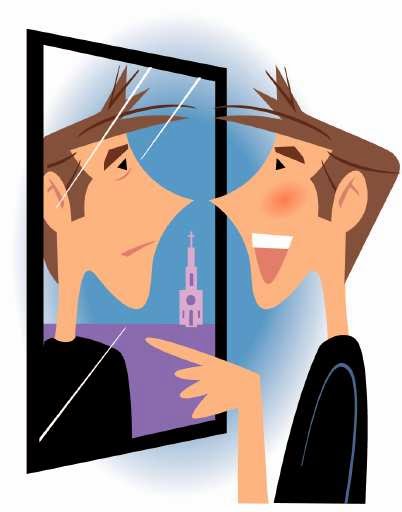 Have you ever laughed at a joke you really didn’t get, because you didn’t want to look stupid? Have you ever found yourself spouting off on a subject you knew perfectly well you were too uninformed to speak to?

I have. More times than I care to remember. You wanna know why I do such silly things? Easy. Because I’m a braggart. Because I’m prideful. Because I don’t want to appear more ignorant than I actually am.

But as with all my other sins, I find comfort in this: Jesus endured this same temptation, yet without sin.

Jesus knew what it was like to be ignorant, and yet he never shot off his mouth despite his ignorance.

“But wait a minute! What do you mean ‘ignorant’?! Was’t Jesus God?” Yes, he was. “Then doesn’t that mean he was omniscient–that he knew everything?” No, it doesn’t. If you don’t believe me, just read Mark 13:32, where Jesus says, “But concerning that day or that hour, no one knows, not even the angels in heaven, nor the Son, but only the Father.”

And Mark 13:32 is simply the tip of the iceberg. We ought not to think that this was the only factoid that Jesus was ignorant of. On the contrary, given what the Gospels tell us about his Incarnation–how he began life as a baby and then “increased in wisdom and stature” (Luke 2:52)–rather than assuming knowledge until ignorance is proven, we would do better to assume ignorance until knowledge is demonstrated. Our default question shouldn’t be “What all was Jesus ignorant of?” but rather “How did Jesus acquire the knowledge that he possessed?” (See our recent post entitled “Did Jesus have to learn his ABC’s?” ).

In addition to all the natural ways he would have learned (his mother and ‘father,’ his rabbis, the Scriptures, personal experience), Jesus’ closest teachers were his eternal Trinitarian helpers, his Father and the Holy Spirit. From his baptism onward, it becomes clear that Jesus was not only God’s beloved Son, but also the great Prophet like unto Moses (Deut. 18:15; cf. John 6:14, Acts 3:22). And as a prophet, he was endowed by God with supernatural knowledge. He was truly a revealer of secrets. Just ask the woman at the well, and she’ll tell you (John 4:17-19).

Many of us Christians often miss this. We who rightly believe in the deity of Christ often mistake Jesus’ supernatural knowledge for infinite knowledge. We attribute to Jesus’ divine omniscience what we ought to attribute to the revelation of his Father through the Holy Spirit. And as a result, we miss out on much of the glory of Christ. We fail to see that he lived his life as a man with limited knowledge in dependence on his Father.

And in this particular case, we fail to see how low Jesus stooped for us, and how humble he really was.

Here’s what I mean by ‘humble.’ Think about what it means that Jesus was often ignorant yet always sinless. That his knowledge was limited to what he had learned through natural means along with what the Father had chosen to reveal to him, and yet he never once sinned with this tongue.

How did this happen? What did this demonstrate? In a word, humility.

An omniscient man can pontificate on every subject under the sun without going out of his depth. A man with limited knowledge can’t…at least not without being an arrogant blowhard. What this has to mean is that Jesus refrained from speaking on subjects he knew was ignorant of.

How different from how we often behave! How often have I found myself making confident assertions about things I don’t know squat about (1 Tim.1:7)! How often in conversation have I nodded fervently as if to say “I knew that already” when in fact I didn’t. How many times have I “added my two cents,” when in reality they were worth much less.

Not Jesus. Not once. Ever.

Our Lord was the humblest man who ever lived.

So let this mind be in us, which was also in Christ Jesus. Though he was in the form of God—though he had infinite knowledge of all things, and the right to pontificate on every subject—he emptied himself by taking upon himself the form of a servant, clothing himself in human ignorance and limitations, and governing his tongue as a humble servant of God.

The good news is this:

Jesus wasn’t a braggart. And because of that, he can pardon and transform braggarts like us.