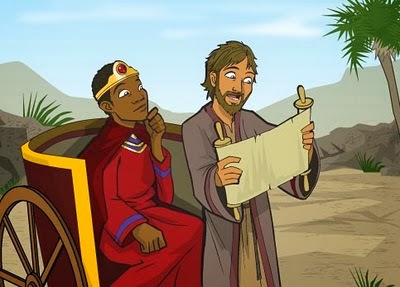 Do you ever wonder what it must have felt like to be an Old Testament prophet?

Surely foretelling the future had to be confusing at times. Given some of the things the Spirit led him to write, Isaiah must have come away from his freshly inked scroll scratching his head more than once. Think of his famous chapter 53 (though of course, he wouldn’t have thought of it as “chapter 53”), in which he writes about how the suffering Servant of Yahweh would be “wounded for our transgressions” and “crushed for our iniquities.”

Can’t you just see Isaiah puzzling over this passage? Can’t you imagine him comparing it with previously written Scriptures from the Pentateuch to try to understand the full meaning of what he had written? Can’t you imagine him laboring in prayer over this passage, asking “Who is this, Lord? What person am I writing about? Is he alive right now? Is he someone I know? And when, Lord? How long? Will I live to see this prophecy come to pass?”

Here’s how the Apostle Peter put it:

Concerning this salvation, the prophets who prophesied about the grace that was to be yours searched and inquired carefully, inquiring what person or time the Spirit of Christ in them was indicating when he predicted the sufferings of Christ and the subsequent glories. (1 Peter 1:10-11, ESV)

In other words, Isaiah wouldn’t have always ‘got it.’ And of course, he wouldn’t be the last person to read Isaiah 53 and ask, “Of whom is the prophet speaking?”

Remember the Ethiopian eunuch? His story is told in Acts 8:26ff. He’s sitting in his chariot in the middle of the desert reading Isaiah 53, and he’s not getting it. Suddenly, out of the blue, a guy named Philip runs up to his chariot and asks him, “Do you understand what you are reading?” And he says, “How can I, unless someone guides me?”

Philip and the eunuch read the passage together—Isaiah writes of a man who was led like a sheep to the slaughter, and remained silent before his murderers. The eunuch asks, “About whom, I ask you, does the prophet say this, about himself or about someone else?”

Good question. Isaiah would have been on the edge of his seat had he been there. Suppose Isaiah could’ve traveled through time to be in that chariot with the eunuch that day. Imagine how he would have reacted when Philip opened his mouth and, beginning with that Scripture, told them the good news about Jesus (Acts 8:35):

Philip: It was like this, Isaiah. His name was Jesus.

Isaiah: Jesus! Hmm. Named after ‘Joshua,’ the one who led us into the Promised Land! Makes sense.

Philip: He was born in Bethlehem—

Isaiah: Like King David! Stands to reason, since he’s supposed to sit on David’s throne (Isa. 9:7). Seems like my buddy Micah told me something like this would happen (Micah 5:2).

Philip: It gets more amazing. His mother’s name was Mary—and she was a virgin when she conceived him.

Philip: Maher-shalal…That’s quite a name. Anyway, I’m almost done; just let me finish. He was given to us as a Son. A man, yes. But more than a man. He was the mighty God, the everlasting Father, and the Prince of Peace (Isa. 9:6-7). Believe it or not, he worked as a carpenter until he was 30 years old. Then a man named John starting preaching in the wilderness—crying out, preparing the way for the Lord (Isa. 40:3). Then Jesus started preaching; he proclaimed liberty to the captives and recovery of sight to the blind (Isa. 61:1). It was as though the new creation were dawning! The eyes of the blind were opened, and the ears of the deaf unstopped. The lame man leaped like a deer, and the tongue of the mute sang for joy (Isa. 35:5-6).

And preaching? No one ever spoke like this man! But few believed him at the time. He was despised and rejected, a man of sorrows and acquainted with grief (Isa. 53:3). Eventually—are you ready for this?—he was betrayed by a friend, given a mock trial, and executed. Hanged on an accursed cross between two murderous thieves, he was numbered with the transgressors (Isa. 53:12).

Thankfully, that was only the beginning. On the third day, the God who had crushed him raised him. God foresaw his offspring, prolonged his days, and ever since then, the pleasure of Yahweh has prospered in his hand (Isa. 53:10). After he was raised, he appeared to many of us. He even took us through your book, Isaiah, and explained to us all that it meant (Luke 24:44-49).

Isaiah: As Yahweh lives, I had no idea it would be so wonderful!

Philip: The best is yet to come. For now, he has gone back to heaven. But he has promised to return, when he will crush his enemies (including the wicked scoundrels who sawed you in half) and save his people. Then, he will bring a new heavens and new earth (Isa. 66:17ff) where the lion will eat straw like an ox (Isa. 12:7).

Isaiah: Sounds like the garden of Eden all over again!

Philip: Indeed. Until then, he has charged us with seeing to it that every tribe and nation hears this good news, which is why I’m out here in the middle of a desert using your book to preach Jesus to an Ethiopian eunuch. Thank you for serving us, Isaiah.

Isaiah: It was nothing. Really.

…the prophets who prophesied about the grace that was to be yours searched and inquired carefully, inquiring what person or time the Spirit of Christ in them was indicating when he predicted the sufferings of Christ and the subsequent glories. It was revealed to them that they were serving not themselves but you, in the things that have now been announced to you through those who preached the good news to you by the Holy Spirit sent from heaven… (1 Peter 1:10-12, ESV)

As J.C. Ryle once said, “The humblest Christian believer understands things which David and Isaiah could never explain.” You are the envy of Isaiah–the least in the kingdom of heaven is greater than he (Matt. 11:11). Next time you read Isaiah, think about that and rejoice.
(Visited 93 times, 1 visits today)